There is plenty of symbolism in Of Mice and Men, and I don’t want to get into all of it, but I do want to give a little attention to the rabbits—because it’s something that differs greatly from Little Chenier. George has a dream of owning his own farm with Lennie and living off the “fatta the lan.” On this farm, Lennie is going to tend to the rabbits.

The rabbits represent the dream that George and Lennie share. In a scene early in the book, as George and Lennie trudge through the forest on the lamb after Lennie got into trouble again, a passage describes rabbits as they disappear noiselessly into the forest. It’s interesting that the thing that represents the dream these two men have scamper away from them, and neither man even noticed they were ever there, as they approach—showing just how out of reach the men’s dream really is.

In Little Chenier, Pemon and Beaux already are living off the fat of the land. They run a small bait shop that sells shrimp and crab that they collect themselves. The men have precious little in way of possessions—they don’t even have a door on the small shack they live in. While Beaux seems content with his meager lifestyle, it is clear that he feels stuck. Even if he wasn’t content what could he do? Who would take care of Pemon if Beaux left? Add in the fact that the love of his life is married to Carl. Beaux’s feelings are represented through the cash register at his small bait shop that is stuck shut.

Change and how it’s Symbolized in the Film

One interesting aspect of the film has to do with change. Several times throughout the film a reference to change from a sales transaction is made, but it is how the characters react to change that are truly curious. Beaux, desperate for a change, refuses his change toward the end of the film after getting the cash register fixed. T-Boy, who is trying to change throughout the film so he can keep the affection of his on-again-off-again girlfriend Nadean tells Beaux not to worry about the change when the register first becomes stuck.

One element that the film is missing that works so well in the novel is the foreshadowing. Candy has an old sheepdog that is described as unable to take care of itself, much like Lennie, and the shop is euthanized by ranch-hand Carlson. After the dog is put down, Candy comments to George about how he should have done it himself. The scene is important for two reasons. One, it establishes the location of the gun that George later uses. Two, well…you know.

The film was originally supposed to have a darker ending that  mirrored the ending in Of Mice and Men, but after Hurricane Katrina devastated the bayou where filming took place, the writer and director decided to rework the ending of the film into a more positive one.

Next week I am going to take a look at Silver Lining Playbook, which can be found on Netflix. I picked up the book version, well it was actually an audiobook, from my library’s digital collection. 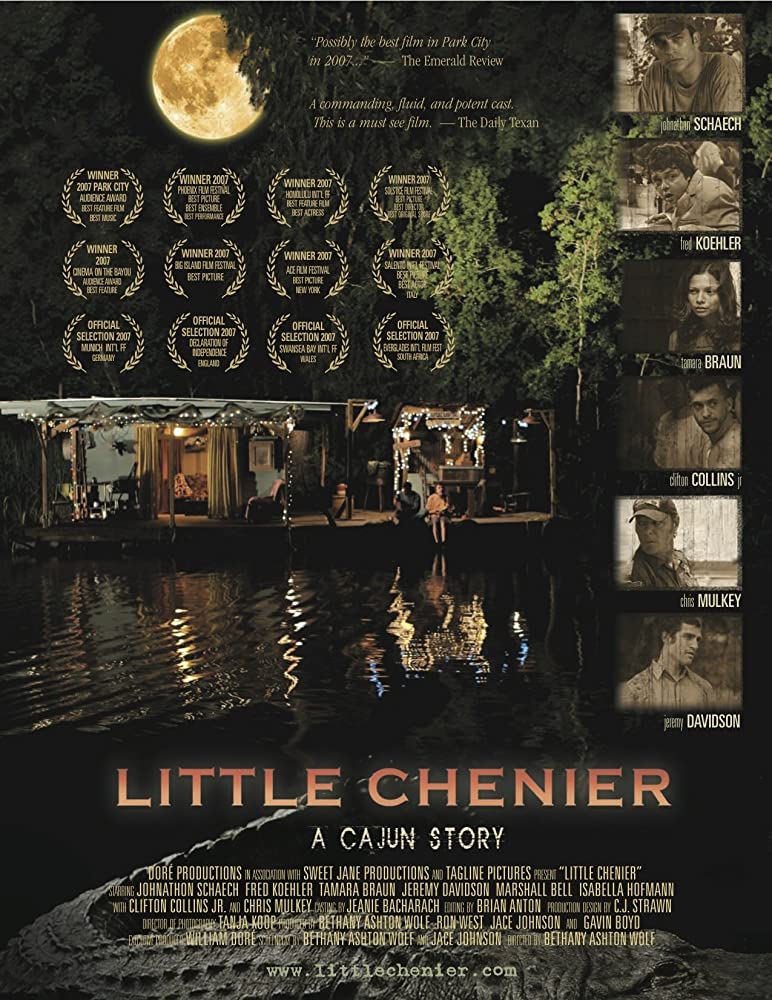 Though Little Chenier gives no credit to Of Mice and Men for the basis of its story, the similarities are striking. Both tell the story of two young men who share a bond, for Lennie and George, it’s a type of fraternity, for Pemon and Beaux, it’s a familial bond. Little Chenier displaces Of Mice and Men to a Louisiana bayou called Little Chenier. Two brothers Pemon and Beaux, Pemon replacing Lennie and Beaux replace George, spend their days fishing—where Pemon always out fishes his brother Beaux—and selling bait at their small bait shop. When the local sheriff is killed by two thugs, his son, Carl takes over as the law in Little Chenier and sets out to make life as hard a possible for the brothers.

END_OF_DOCUMENT_TOKEN_TO_BE_REPLACED

Here is a fun one. It’s rare to see a dark comedy that is also light-hearted­—in fact, it doesn’t even seem like it should work, but Arsenic and Old Lace is able to pull it off. Both versions, the play and the film starring Cary Grant, tell the story of the Brewster family. Mortimer, Grant’s character, is a film critic and certified bachelor, this is made for the film, who has written a number of books against marriage, yet has found himself smitten with the neighbor and preacher’s daughter, Elaine Harper. He’s still in love with Elaine in the play, but he doesn’t take such a stark anti-marriage stand.

END_OF_DOCUMENT_TOKEN_TO_BE_REPLACED

Jojo Rabbit and the novel it is based on Caging Skies by Christine Leunens are very different works. They are so vastly different that, except for a few elements, the only thing they share are the basic plot—a young boy in the Hitler Youth discovers that his mother has a Jewish girl hidden in the attic. Jojo Rabbit takes a satirical approach to the Third Reich, poking fun at the Nazi belief system and brainwashing techniques. Caging Skies has a different tone and explores the destructive nature of obsession. If you haven’t seen Jojo Rabbit, this post does contain spoilers for both book and movie.

END_OF_DOCUMENT_TOKEN_TO_BE_REPLACED

How much is 2 million dollars really worth? To Anton Chigurh its worth at least seven lives, or was it nine? I believe that’s the final kill count for Chigurh in No Country for Old Men. The 2007 film, directed by The Coen Brothers, follows the novel closely save for a few scenes, explores the relationship between morality and immorality, order and chaos, and horror and violence of everyday life.

END_OF_DOCUMENT_TOKEN_TO_BE_REPLACED

This week is going to be a bit different, but next week will be business as usual. Today, I am attempted to answer the age-old question: is the movie better than the book? Also at the end of the I’m going to decide which adaptation—I don’t want to say is the best—so I’ll say which adaptation is my favorite. I’m not leaving the literature out ether though. Don’t worry.

END_OF_DOCUMENT_TOKEN_TO_BE_REPLACED

Can we ever really know someone? This is one of the questions at the heart of Richard Matheson’s 1970 short story “Button, Button” which was adapted to the screen in 2009 as The Box. Both works tell the story of husband and wife, Arthur and Norma, who receive a mysterious package on their doorstep one day. Soon after, the couple is visited by a stranger who tells them that two things will happen if they press the button on the box they received. One, they will receive a cash pay of one million dollars—50 thousand dollars in the short story—and somewhere someone they don’t know will be killed.

END_OF_DOCUMENT_TOKEN_TO_BE_REPLACED

Crazy Heart is a 1987 novel by Thomas Cobb; adapted for the screen by Scoot Cooper in 2009 starring Jeff Bridges as Otis “Bad” Blake, Maggie Gyllenhaal as Jean Craddick, and Colin Ferrell as Tommy Sweet. The film and novel tell the story of Bad Blake, a down-on-his-luck alcoholic fading county music star. Bad meets Jean and her son Buddy and attempts a relationship with her, but it ultimately fails under the weight of his addiction.

END_OF_DOCUMENT_TOKEN_TO_BE_REPLACED

Ambition is a good thing to have. Right? It’s not the kind of thing that will see you killing a load of people for a chance to move up in the world. Right?

That’s just one of the many themes in Macbeth, and the only theme we are going to be cover this week while we compare William Shakespeare’s Macbeth to Scotland, PA. The 2001 film, written and directed by William Morrisette, retells and modernizes Macbeth by setting it in a restaurant in the 1970s. Interestingly enough, it is not the only retelling of Macbeth that sets the story in a restaurant. The BBC series Shakespeare Retold updates the story to a four-star restaurant in London.

END_OF_DOCUMENT_TOKEN_TO_BE_REPLACED

The Shining. What is the shining? Well, if you only watch the 1980 film version, directed by Stanley Kubrick and starring Jack Nicholson and a Shirley Duvall and directed by Stanley Kubrick, then you probably don’t know what the shining is or what is supposed to do. That’s not your fault, the film simply doesn’t give you anything to work with. It’s some kind of, I don’t know, telepathic force that may or may not be the source of Jack Torrance’s deepening madness. The film is a high-context film. There’s a ton of symbolism.